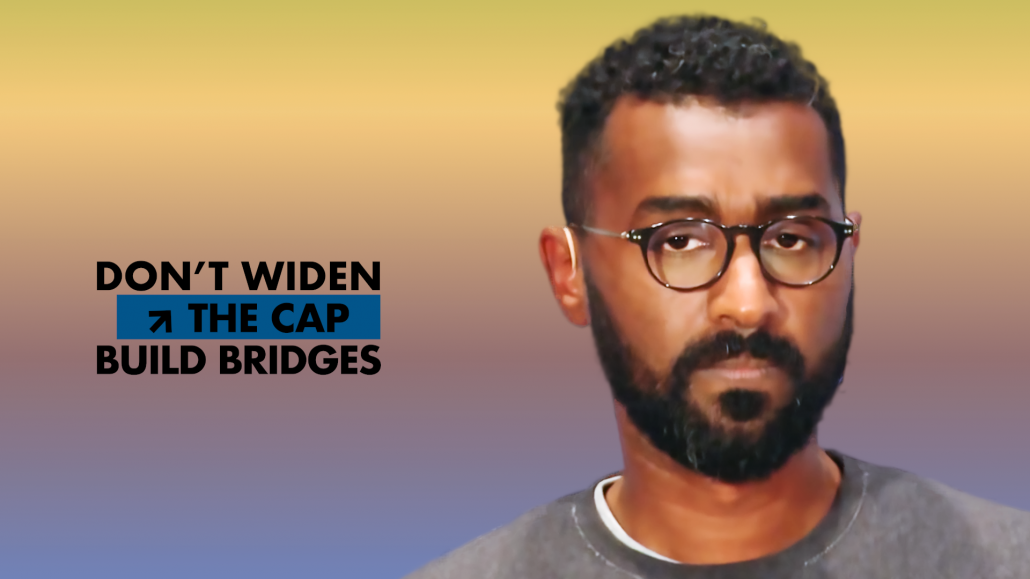 “It’s 7 January 2015 – an ordinary day. I’m sitting in my living room in Doha watching TV. Suddenly my phone starts ringing and I get all these notifications on Twitter and Facebook, people asking me, ‘Have you heard the news?’ So I switch on Al Jazeera. Charlie Hebdo has been attacked, several cartoonists and a policeman killed. The first thing that came to mind was ‘Why now? Why after all this time? What has changed?’ And of course you think Muslims should apologise. ‘Do we have to apologize?’ There are 1.6 billion Muslims and three people did this. You think, is it going to be a post 9/11 effect? So I drew a cartoon. It was the world pointing at a man and telling him he was with the terrorists, and a terrorist pointing at the same man telling him he was with the infidels, and the man is saying ‘I’m just a Muslim’. And this is how the majority of Muslims feel. That day the cartoon went viral. It was shared re-tweeted and used by the media, and what gave me hope is that most people that shared it were non-Arab and non-Muslim. Freedom of speech is a great responsibility. You can widen the gap or build bridges.”

How can you use freedom of speech as a political cartoonist? How can you create conversations online, not conflict? Why is sharing cartoons so important in working towards peace? Khalid Albaih grew up in Sudan until the age of 10 when his family fled to Qatar. Khalid, who is an artist and political cartoonist, is now living in Denmark, and is part of an artist-in-residence program for creatives who are threatened in their own country.